From FountainPen
Jump to navigation Jump to search
This page is a translated version of the page Edacoto and the translation is 100% complete.

Edacoto is one of the main historic French brands, the company's origins are uncertain but before the First World War. It was founded as a manufacturer of mechanical pencils, entering fountain pens market after a collaboration with Aurora since the '30s.

The Edacoto pens are characterized by a general average quality, and although the company has never been reported for special contributions or innovative styling, the validity of its products has ensured the success and is still popular with collectors.{{Infobox_Brand|Edacoto}}

Edacoto was established (it is assumed in the '10s, an exact date is unknown) with the Edac name by Jacques Bonhomme in Issy-Les-Moulineaux, but the company seat was moved to the Boulevard Arago 104, in Paris, at the end of the World War I. Until 1920 the company marketed its products under the Edac brand name, passing to use of the Edacoto trademark only in a second time for commercial reasons.

An Edacoto 104 in mottled hard rubber

The company was founded as a metal mechanical pencils manufacturer, but since 1922 it also began to produce fountain pens. These initial models were black or mottled hard rubber lever filler or safety pens, with ball clip and double ring on the cap. In this period was also made ​a particular ​lever filler metal pen (using a nickel and copper alloy) and friction cap; the peculiarity was due to the fact that the pen had difficulties in the ink flow to the nib, which tended to dry out. For this reason the internal spring was "U" shaped, one side was driven by the lever mechanism, the other by a button near the junction used to compress the sac and restore the ink flow.

An Edacoto 104 in rare blue/white color 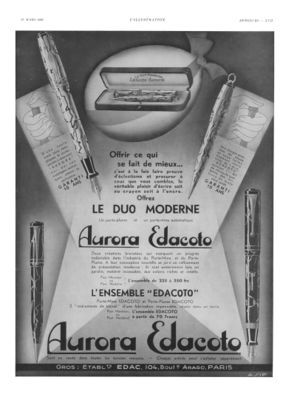 A 1932 advertisement for Le Duo Moderne

Until the '30s the company produced mostly mechanical pencils, but in 1930 it reached a trade agreement with Aurora italian company, who entrusted it the marketing in France for his fountain pens. From this agreement comes a new product, Le Duo Moderne, a combination of an Aurora fountain pen (an Internationale model) and an Edacoto mechanical pencil.

In 1932, the company introduced its new fountain pen models, with lever filler double band cap and and ball clip similar to the Duofold one. The following year were produced new pens with more streamlined shapes and more band/rings (up to five) (Edacoto 104?). It's from this time the beginning of the Bijouterie serie production, fountain pens made ​​in gold plated metal (but also in solid gold and silver), and characterized by a great attention in the engravings and decorations. The serie remained in production until after the WWII, changing various filling systems.

In 1934 the brand name was engraved on the clip and in 1937 were adopted, new clips with a jagged line with a triangular arrow-shaped tip. The new line was produced with two or three cap band, until 1943. In 1938 was introduced the Super Edacoto 200 model, also called Visible or Transparent, this is probably the most significant model produced by the company. The pen had the front part of the barrel transparent, and was equipped with a rubber sac on the back. This was compressed by a lever, which caused the filling of both the transparent section and the sac. When the transparent section had been emptied it was possible to make use the in reserve maintained inside the rubber sac with the action on the lever itself.

In 1941 were introduced new models similar to the previous ones, but without transparent barrel and with a normal lever filler system. In 1943 was introduced the Edacoto 87, in both button and lever filler,[1] with a new clip and a more slender shape. It was also produced in molded plastic with solid color, and it was called Le stylo de france. In 1947 was produced another model with the same name, with the transparent body and a more swollen shape. The quality, while still fine, was not in par to that of the previous models. 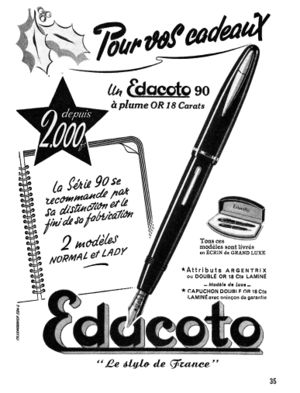 An Edacoto advertising from '50s.

It should be noted, starting from 1948, the production attempt of a curious ballpoint pen, the Pointor, equipped by a particular button filling system, which however did not reach the expected success. From 1948, mentioned in an advertisement, is also the model 95 grand luxe, still called Le stylo de france. In the '50s, put into crisis by the advent of the ballpoint pen, the Edacoto produced a large variety of average quality models. In 1955, following the success of the Parker 51, was created an hooded nib model. In 1958 was introduced the cartridge filling system.

In 1959 together with a group of other companies (Evergood, Mallat, Gold Starry, Walkover and Soma), the company participated in the consortium that produced the Visor Pen, that was a great success, but was unable to revive the fortunes of the company that was absorbed by Mallat at the end of the '50s. The brand Edacoto continued to appear for a few years to finally disappear in the mid '60s.