From FountainPen
(Redirected from Conklin)
Jump to navigation Jump to search
This page is a translated version of the page Conklin and the translation is 100% complete.

Conklin was officially founded in 1898, but its founder, Roy Conklin, had been in the fountain pen business since 1891. The success of the company was mainly due to the invention of the Crescent Filler, the first really functional automatic filling mechanism. But after its initial period the company underwent a gradual decline, completely ceasing production around the 1948. The brand was recreated in 2000 with the production of pens that reflect the design of the old models. 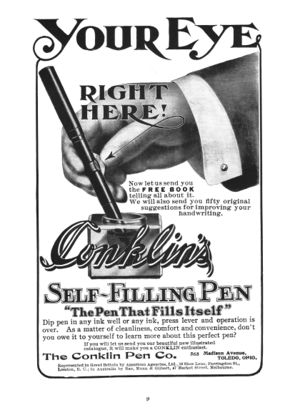 In 1916 Conklin introduced an innovative spring clip, that can be open very easily; for its simplicity and elegance the same mechanism has been used today by modern companies like Visconti, the only patent found about it (nº US-1267575) was applied in 1917. The sales of fountain pens, although declining, remained at the top of the market, also if Conklin models become to be considered a little dated. 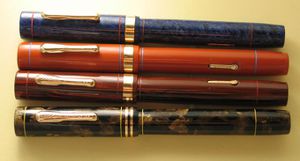 A set of Endura

The Endura was the top model of Conklin, with the name put on the nib and the body, produced in three version, a short vest pocket, a standard and senior senior size. In the same time were also produced an economic model for students, that so collector are calling Student (but mentioned in and advertisement as "Three Fifty" by their price in dollars, $3.50), with the same shape and dimension of the Endura standard model, also produced in pastel colors. 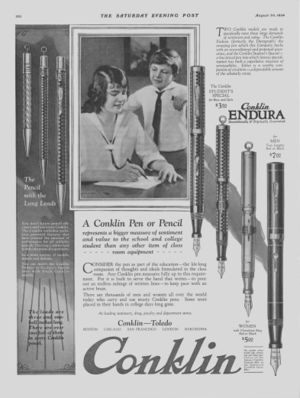 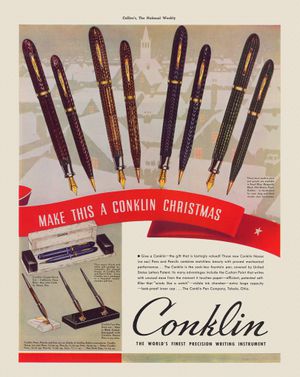