From FountainPen
(Redirected from Saratoga)
Jump to navigation Jump to search
This page is a translated version of the page Saratoga and the translation is 100% complete. 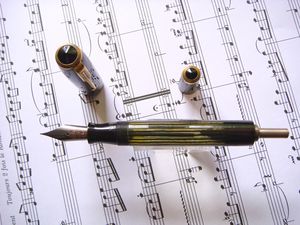 The initial Saratoga production was introduced to the market in 1936, [2] with three quality models, clearly inspired by the Parker Vacumatic, referred to as Maxima, Medium and Standard. The models used a filling system similar to the Vacumatic one,[3] they were made of semi-transparent celluloid, that someone is attributed to OMAS, being very similar to those used for the Minerva Classica models.[4]