From FountainPen
(Redirected from Monterosa)
Jump to: navigation, search
This page is a translated version of the page Monterosa and the translation is 100% complete. 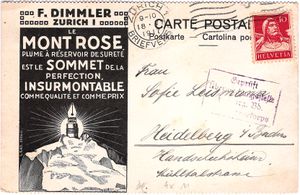 The company was originally Swiss and independent (founded in Zurich by Fritz Dimmler), although it was limited to market pens produced by others. The exact date of foundation it is not known, but in Italy the trade mark was registered in 1912, which will be taken as the date of foundation. The brand is best known for being used by the Montblanc (it is unclear whether a purchase or independently) for its lower-end production, with models similar to the series 340. It is not clear until it has remained a separate company, but certainly in the post-war production is Montblanc. We know for a fact that in Italy the brand (Reg. Gen. N. 12889), originally recorded by such Walter Kessel, was transferred to the Montblanc in September 1920.