From FountainPen
(Redirected from Geha)
Jump to navigation Jump to search
This page is a translated version of the page Geha and the translation is 100% complete. 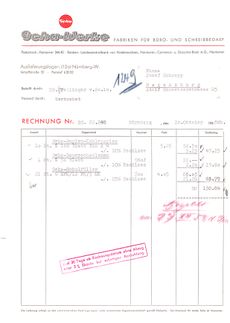 The company was founded in 1918 in Hanover by Heinrich and Conrad Hartmann, the name is short for Gebrüder-Hartmann (Hartmann brothers).[1] The company was founded specializing in the production of material for stationery, especially paper, blocks, carbonless papers and tapes, becoming in the 20s one of the market leaders in stationery postal sales.

Geha entered the fountain pen market in 1950, with the production of economic pens made for the student market called Regent, featuring a band with the company logo. The distinguishing feature of the Geha pens was the use of a piston filler equipped with a special ink reservoir (see patents nº GB-666830 and nº DE-958812) that allowed an emergency reserve to be maintained, usable by pushing a pin located under the feeder.

In 1957 the production was reorganized, the ring with the logo was removed, changing to a simple ring on the cap edge, and introducing a classification of price range based on the number of rings placed over the cap. The pens were still identified, as for the previous Regent by a three-digit numerical code, and mostly named Geha-Schulfüller.

Beginning in 1962, models were produced with inlaid nib (patent nº DE-1161500) similar to PFM by Sheaffer, called Goldschwinge. As the 1960s continued, several variants were produced, and cheaper lines of hooded nib pens. The piston filler system with ink reserve mechanism remains as distinctive. From 1961 were also introduced cartridge filler models, maintaining the ink reserve through the use of two separate cartridges (see patent nº DE-1215025), as for the Duo-Cart of the Aurora.

In the '70s the production of fountain pens was increasingly oriented to the economic lines for students, remaining however marginal in the activities of the company that since 1972 specialized in copying machines and overhead projectors. In 1990 the Geha was acquired by Pelikan, remaining however a production of pens with its own brand, within the one of Pelikan.