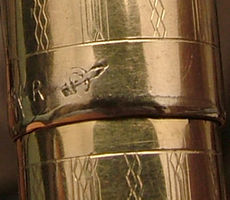 Although not strictly a fountain pens manufacturer, the Fratelli Cavaliere has a significant role in the Italian fountain pen history, as it is at the apex in the overlay processing that are found in pens distributed by many other brands. Therefore, even in the absence of a production marked explicitly Fratelli Cavaliere is quite common to find pens bearing the company logo: a horseshoe intersected by a stylus, showed in the side picture, registered with the words "Fabbrica penne oro e fermagli",[1] The company production can also identified, by the less known Linda Darnes punch (wife of founder Giuseppe Cavaliere) shown in the picture below.

The company was based in Milan, in Via Cesare da Sesto 12 and was active from the 20s to 50s. It is not known a founding date but Letizia Jacopini indicates the mid-20s, and the full name of "Prima Fabbrica Nazionale Penne Oro e Matite". Its overlays can be found on pens of the most famous brands like Montblanc, Kaweco, Astoria, Waterman, Columbus, and other less known as Omega, Europa, Aurea. The company catalogs reported hundreds of motifs and decorations available. 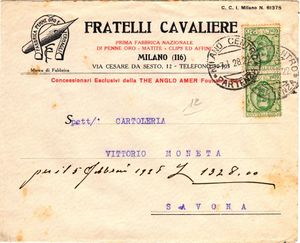 An envelope from January 1928

In addition to overlay products for other brands it is believed that the company direct production is linked to various brand names. The main one is probably Universal for there are may sample with the brand punch, other are Ideal and Anglo-Amer; for this latest trademark (more precisely for the "THE ANGLO AMER fountain pen") the company claims to be and agent in the envelope shown by side; we still don't know if this is related to the Angloamer trademark.

The Fratelli Cavaliere it's best known for the production of the beautiful overlays made on behalf of Waterman, for which the company officially became the producer at least since 1929 (as it results from this invoice), which are considered among the most refined of the time. Between 1932 and 1934[2] the Cavaliere brothers also become exclusive agents for Italy of Waterman, with the passage the agents office to the new headquarters in Via Camperio 9. The management of the representation was carried out by Carlo and Giuseppe Cavaliere, while Aldo continued to follow the production activities.

The later history of the company is quite uncertain; in the "Annuario Industriale della provincia di Milano" of 1939 (at page 870) the head office is listed at Viale Papiniano 38 and the reported owner is Alessio Cavaliere. On the other hand, there is no mention of the company in the 1956 "Annuario generale dell'industria e del prodotto italiano" (General yearbook of Italian industry and products), which presumably allows an upper limit to be placed on the closure of the company, but it still turns out (e.g. from this instruction leaflet) that commercial agency for Waterman was maintained by Carlo Cavaliere at least until the mid-1950s.