From FountainPen
(Redirected from Colorado)
Jump to navigation Jump to search
This page is a translated version of the page Colorado and the translation is 100% complete. 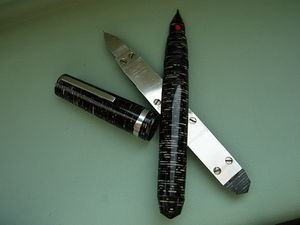 The Colorado brand distinguishes, rather than a company, a single pen. For long time these pens, because of the filling system (a so called "stantuffo tuffante"), were attributed to Omas but they are from a completely independent brand, linked to the activities of Orlando Quadretti who also holds the trademark registration (Reg. Gen. N. 75447). [1]

The creation of the pen is linked to the activities of the Quadretti store, dating from 1938-39, which specialized in the sale of fountain pens, and the prototype of the pen, still in possession of the heirs, was built around the 1939. At that time it was in vogue the trend of "double" pens (launched by the Zerollo and continued with other models such as the Itala) able to write with two different colors.

Unlike the two mentioned models the Colorado is characterized by a construction with two half scissor-like pens that slide one over the other up to be disposed in opposition to 180°. Passing the cap from side to side was therefore faster switch from one writing to another. In addition, the hinge scissor mechanism can be considered less delicate than the much more complex mechanisms of the other two mentioned models.

The pen, made in celluloid is known to be made in black (the most common version) and in ringed versions in gray and red/brown or mottled (gray and brown). The production took place, however, in its own even if the nibs were purchased from a company in Bologna, with the "Quadretti" imprint. The production, however, given the rapid passing of the trend, was rather small, both in terms of numbers and in length of time, which makes the pen quite rare.

Although the Colorado is the only model with this name, is known a further "Quadretti" production of some celluloid pens equipped with ordinary nib marked themself "Quadretti", probably dating back to the early 40s. The production seems to have been permanently discontinued after the war.