From FountainPen
(Redirected from Zerollo)
Jump to navigation Jump to search
This page is a translated version of the page Zerollo and the translation is 100% complete.

The Zerollo was founded in 1932 by David Dante Zerollo[1] in Genoa for the production of one of the most original ever made pens, equipped by special telescopic system that allowed alternating between two different pens contained in a single body, extracting either one and then the other.[2] The pen was protected, according to the manufacturer, by patents obtained from all over the world, but the only known are the U.S. Patent nº US-1893130 required in 1930 in Italy, in 1931 in the U.S.A. and awarded in 1933, the British patent nº GB-397736, approved August 31 , 1933 and the French patent nº FR-728038.[3] 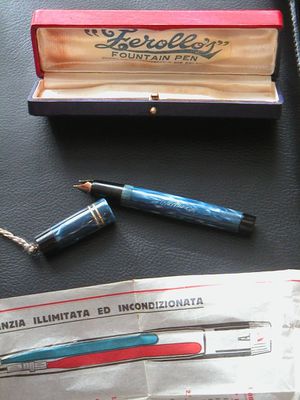 Zerollo produced substantially only one model, albeit in a considerable number of variants, called Duo Color precisely by its characteristics of being made by two internal separate pens allowing to write in two different colors. The mechanism, which incorporates the technology used on the classic safety pens is extremely sophisticated and bears close tolerances, which makes the pen rather weak in terms of mechanical stability. Through an ingenious screw system, the two pens, which are separated by a metal plate attached to the bottom that makes them rotate, are sliding in opposite directions by means of grooves made ​​in the body of the pen, and brought alternately inside and outside the body according to the direction in which you rotate the cap.

To write is necessary to completely extract one of the two pens from the body, bringing the other inside. In the rest position instead the two pens must be placed at the same height remaining partially protruding from the front opening, and only in this position it is possible to close the pen putting the cap and refill them. The cap has in fact only the purpose of protection of the tips of two pens, since the ink is not contained in the barrel body but in the individual pens that are housed in it. 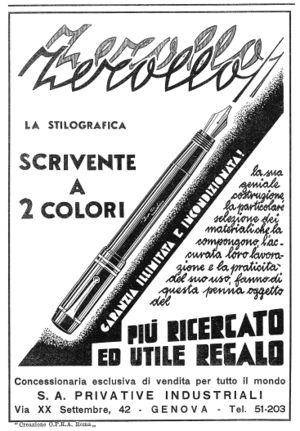 Filling the pens is done with the principle of the match-stick filler through two small holes on the body, which, when the pens are in theirs rest position, provide access to the pressure bars that allow to wring the sacs placed internally of both pens, that contain the ink. In this case it is not necessary to obtain a match-stick, given that the head of the cap mounts inside a thin metal shaft suitable for the purpose. Therefore you simply need to unscrew it and use it as a handle to push through the holes in the side.

First versions were made ​​of hard rubber, and there are also overlay versions in gold rolled metal. The initial production was certainly very small, since have been found handwritten guarantee scraps dated 1933, signed individually by Dante Zerollo. This first production was followed by new celluloid versions, made ​​in beautiful marbled colors or wood grain, and with extremely refined working as a peculiar spiral faceting.

Given quality and sophistication of the processes, and the presence of similar celluloid, it has been suggested that the production of these pens have been entrusted to the OMAS, but there is no proof, or reference document in this regard that let support this hypothesis, and the similarity or the quality of the work can not be considered a final element, as it can be assumed that Zerollo could have purchased some parts from OMAS.[4]

The company had some success, and was able to sell its products abroad relying on Dunhill for the English market and on Unic for the French one. But although functional it was still a pen equipped with a very complex and delicate mechanical system, difficult to repair, which made it brittle and all in all not much more convenient to use than the simple and straightforward solution to carry around two pens. While maintaining production based only on this particular model, and not being able to produce further innovation, with the fall of the interest aroused in the initial period, Zerollo suffered a progressive decline disappearing from the market after the Second World War.

For the particularity of his fountain pens, combined with the lack of production and even more limited availability of working models, a Zerollo is among the most collectible fountain pens models, reaching high prices, even if the historical importance of the company, especially in relation to the international scene, is relatively marginal.