From FountainPen
(Redirected from Carter)
Jump to navigation Jump to search
This page is a translated version of the page Carter and the translation is 100% complete.

The William Carter Company was founded in 1858 as an ink manufacturer, and became the world leaders in this field at the end of 1800. In the mid of '20s they entered the fountain pen market, that at the time was in its full development. But after the great depression of 1929, which caused a sharp reduction in the fountain pen market, the company decided to stop producing pens and mechanical pencils in the early 30's.

The pens produced by Carter were excellent quality, and they made in unusual colors much different than those of it competitors of that time. Because the short period of activity of the company, its pens are quite rare and quite sought by the collectors.

Carter was founded in 1858 in Boston by William Carter, a stationer which began to sell inks produced by other under its own brand. Then he took some patents and started also his own production; the activity had a great success, so much so that in 1884 the Carter became the first world ink producer. A few years later, in 1888, the Carter was incorporated under the name of Carter's Ink Company.

In the mid of '20s, the fountain pens golden era, Carter decided to venture into the production of writing instruments. The modalities of its entry in the fountain pen marker are not very clear: according to some the production began with the acquisition of patents, materials and equipment from another company that recently underwent bankrupt, the Laughlin Pen Company, according to others their pens were made by the De Witt-La France, a fountain pen manufacturer whose facilities were close to those of Carter, that already produced fountain pen for the Laughlin Pen Company and provided pens for the Rexall stores chain.

Also the connection between Carter and De Witt-La France are not so clear, someone argue that Carter acquired them, others that Carter was simply the owner of the land on which their facilities stood and the largest buyer of their products. The De Witt-La France made pens for other brands (in the '30s they will bind to Chilton). The only fact that has been confirmed[1] is that Carter has produced the Superite brand and that David J. La France and William P. De Witt assigned some of their patents (see here) to Carter. 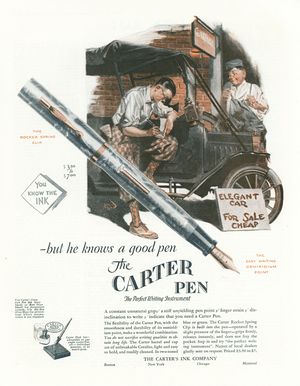 Advertisement of 1927, with the slogan You know the ink

Anyway the Carter pens were of excellent quality (with nothing to envy to the most famous ones done by Waterman, Sheaffer and Parker). The De Witt-La France owned also some significant patents, one for a very functional and easy to produce spring clip, then called Rocker Spring Clip, (nº US-1350412), another one for a tethered lever filler system (nº US-1209978), that allowed to limit vertically the travel of the lever, and another one for an efficient feeder (nº US-1340277), all these features can be found on Carter pens.

Even the production beginning of the Carter pens is not clear, someone set this back to 1924,[2] when it seems that the first pens marketed by Carter appeared, but it seems that they were manufacturing residues of Laughlin, others set the beginning in 1926. The first pens marked Carter were launched under the slogan You know the ink. These models were hard rubber flattops, with the the De Witt-La France patented spring-loaded clip, probably obtained from the materials inherited from Laughlin. These pen did not have a model name, and they are called simply The Carter Pen.

In 1927 Carter introduced a new line of celluloid pens, called Carter Coralite Pen keeping the same flattop shape of hard rubber models, but using a set of colors of great impact. These first models were produced in different sizes, with nibs measures between 2 and 7, and identified by a number whose last digit indicated the nib measure and the other the celluloid color. There were produced also desktop models (but only in two measures, 6 and 2) and ladies models with no clip, but with a cap ring. 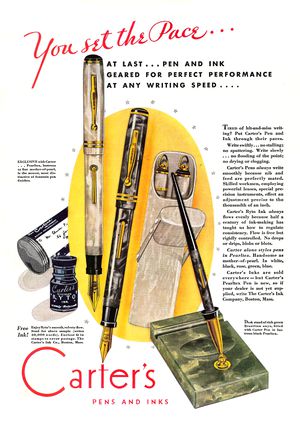 Advertisement of the Pearltex models

In 1929 Carter introduced a new iridescent plastic material, called Pearltex made combining mother of pearl and celluloid with a patented process. The name of this material also became the name given to top line of pens. They were made in different sizes, with nibs in the extent of measures between 2 and 8, and in different iridescent colors, called Rose Petal, Wave Green, Cerulean Blue and Pearl White.

The middle line pens were made in celluloid, still called Coralite. Also these were produced in different sizes. Again Carter distinguished itself for the style of available colors, far beyond the classical Jade Green and Pearl & Black used by most competitors, offering many new colors of great visual impact: Blue, Lacquer Red, Red Black mottled, Turquoise Blue, and Squirrel Gray.

For the lower end pens Carter continued to use the hard rubber, while retaining the same style and characteristics of the higher price pens. In the years there were also introduced some stylistic variations, such as the presence of rings decorations in the top of the cap or in the bottom of the body, or the use of colored inserts between the cap rings.

With the great depression of 1929 the company found himself facing the first major crisis in the fountain pen market: many models were retired and the production was cut. Starting form 1930 were introduced pens with streamlined cap and the bottom, adopting of the style just came into vogue with the Balance. There were introduced also some cheaper pen models with no metallic ring decoration, but keeping colors and shape of the Pearltex e Coralite lines.

In this last period, the pens were of lesser quality, produced with thinner and lower quality materials. In 1932, in a crisis where fountain pens market suffered a strong decline, the company decided to concentrate production on its main product, the inks, and left the fountain pen market, although it Carter pens could be found up to around 1938, presumably as the result of blending pieces of scrap derived from production.

The distinguishing features of Carter pens were elegance, technical excellence and high quality packaging, common to the features that had fostered the success of its inks. Having been in the fountain pen market for just a few years, Carter pens are much sought by collectors, also because the celluloid used in their production is easily susceptible to discoloration, the models in good condition are even more rare and can reach very high prices.