From FountainPen
(Redirected from Washing)
Jump to: navigation, search 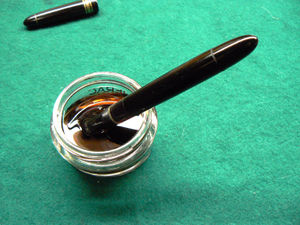 Washing a fountain pen is one of the most common maintenance operations, but although it is conceptually simple, it is also one of the operations on which there are so many different opinions, methodologies, and ... sometimes even idiosyncrasies.

The first point to clarify then is that if you use a fountain pen continuously and keeping the same type of ink, washing (at least the internal one) may well not be necessary. If you really feel uncomfortable, you can rinse the nib under the tap or in a bowl, but keep in mind that the frenzy of cleaning (often with inappropriate materials or methods) is one of the most common causes of damage to the fountain pens.

The second point to keep in mind is that it is one thing to wash a pen for a change of ink or to store it, another to soak it to remedy a deposit. We will concentrate on the first case, for the second we refer to the page on the cleaning of the feeding system. Normally for the washing it's right to usne only water to ambient temperature, and it is absolutely not necessary to resort to cleansers, that they serve only in particular cases. Especially do no use, as is sometimes done, solvents such as alcohol, which can damage the material. The variables are usually:

The soak time is the most important of the three variables and depends on the situation. If the pen has remained unused and you have to remedy a deposit or a clogging is usually very long, in fact the ink, especially when it dries and remains in that state for a long time, is not easily soluble. In this case, however, more than maintenance, it is a question of restoration, and as mentioned for these issues, please refer to the page on the cleaning of the feeding system.

If instead you simply want to do a little more thorough washing, you can just soak until the pen no longer disperses ink in the water. In general it is not necessary to immerse the entire pen, just the tip, or, in case it is easily removable, as for a pen with cartridge filler, the entire section. Once submerged it is advisable to change the water periodically, let's say a couple of times a day. Again, it is not advisable to get caught up in the frenzy and drain the aqueduct by changing the water as soon as you notice a little diffusion of ink. The presence of already dissolved ink does not significantly change the speed of dissolution of the missing one, certainly not enough to make up for the time lost in removing and replacing the water.

You can still speed up some phases by using the appropriate detergent, but still keep in mind that for a complete and thorough cleaning you must give time to the residual ink contained in the feeder to dissolve, and for simple diffusion this time can be very long, so in case of such needs you can think of using a specific equipment such as the washing machine invented for fun by the technical department of the FountainPen.it forum.

As far as the water temperature is concerned, the recommended temperature is the ambient one, but even if you use lukewarm water (up to 30 - 40 °C) you should not have any problems of deformation with the various materials. However, it remains to be considered that, unless you have a thermostated thermal tank, even if initially warm, the water will inevitably tend to reach room temperature in a relatively short time. For this reason, we recommend the use of water at room temperature in all those cases in which the pen must be soaked for periods of time longer than ten minutes.

The most controversial point is still the question of which detergents, if any, should be used. To some people it seems impossible to get a real cleaning if you do not add some kind of detergent to the washing. However, it should be clear in mind that surfactants generally serve to remove fats, and the fountain pen ink is not made of fats. In fact, fountain pen inks are normally solutions, which means that their pigments are "soluble" in water. They may not be as soluble, or more so, in soap, alcohol, bleach or ammonia, all of which may be aggressive on the pen material.

Knowing the type of plastic resin of your fountain pen you can look (for example on the net) for a table of compatibility of the material with other substances, and try to use them. But for routine maintenance there is no scientific evidence of greater cleaning with the use of detergents of various kinds, so the use of water alone is still the safest option and can at most (if really a detergent can be more effective) take a little more time.

Another device motivated by more psychological than real reasons is the use of distilled water, dictated by qualms about calcareous deposits for the evaporation of water once the washing is finished. A quick calculation on the probable and expected calcareous deposit, shows that to deposit one gram of calcium carbonate you need numbers in the order of 30000 drying and evaporation cycles, even with very limy water.