From FountainPen
(Redirected from Section)
Jump to navigation Jump to search
This page is a translated version of the page Sezione and the translation is 100% complete. 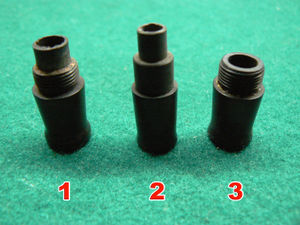 It's called "section" the final block of the tip of the pen, the one in which the nib and feeder are inserted. The figure shows the three most common types of section present on antique pens, corresponding to three different types of filling system; for more details on this type please refer to the page on "section types and repair". A further nomenclature related to the section is that of the so-called "nipple", present only on some types of section (in the figure types 1 and 2), used on pens whose filling system requires the presence of a sac, which is usually glued on the collar.

The section is present on almost all the fountain pens except for some particular designs like PFM, where the nib is directly inlaid on the section and then protrude, or as in the Parker T1 or the Pilot Murex where the nib is the continuation of the metal body. To these specific exceptions are added all the safety, which for construction mode do not have a section, being the nib retractable inside the body of the pen.

The section, in addition to be used to keep in contact nib and feeder, is also the most common grip point of the pen in the writing phase, and for this it generally presents a flared part that allows a more secure grip. In some cases, as in the Parker 75, this is also suitably worked or shaped with ergonomic shapes (triangular, in the case cited) to offer specific support surfaces for the fingers that facilitate the handle.

Apart from this, the section is generally the part of the pen traditionally less subject in itself to innovations of a technical and stylistic nature, even if there are particular models that have some specific features such as the aforementioned Parker 75 with the ring for positioning the nib or the first series of Crest with the thread on the top of the section itself or the special sections with transparent window (the Visulated of the Sheaffer) used to make the ink level visible even with pens equipped with a loading system that generally does not allows it (as for example in the Balance and in the Doric with lever filler).