From FountainPen
Jump to: navigation, search
This page is a translated version of the page Pagliero and the translation is 100% complete.
Pagliero Logo

The Pagliero brand was founded in 1917 by Luigi Pagliero in Settimo Torinese, and it is between the few Italian hystorical brand still active. Although the birth of the company is very old, the production of pens is much less, and is believed to be started only in the '20s. The company was mainly active in the production of mid-range fountain pens, also for others brands, and used a wide variety of names (such as Red Circle, FERT, Regale, Plevonia, Condor, Stilnova, Fulgens) for its own models.

The production, although it was mainly directed to the low tiers, is characterized by a rather good overall quality, but the scale of production and the brand names proliferation often makes this company, which also remains one of the most important on the Italian scene, less appreciated within the collectors.

The Ditta Luigi Pagliero company, later renamed Fratelli Pagliero and then Luigi Pagliero e F. was founded by Luigi Pagliero in 1917[1] in Settimo Torinese, as a company working various materials (bone, horn, tortoiseshell, mother of pearl) for the production of everyday objects (buttons for the most part, but also combs, mouthpieces for pipes, etc..). With the fountain pens production boom of the '20s it was not too difficult for the company, which had already the necessary type of working machinery, to start producing and processing pens or parts of pens on behalf of other companies.[2]

Fountain pens production by Pagliero is believed to have started in the '20s with the use of celluloid, which was also used for the buttons and some of the other objects produced by the compan. It became the main company product only since the '30s. The company's choice was, however, to address the economic production of mid-range pens or even committed production for other companies or for promotional purposes, focusing on the expansion with a very wide distribution network.

The production sees as its most important brand in the '30s the Red Circle (Reg. Gen. N. 51267), registered in 1934, which was promoted with an extensive advertising campaign. This was followed by a great variety of other brands, such as Regale, Stilnova (Reg. Gen. N. 111841), Condor (Reg. Gen. N. 119927). The lower end was marked instead Vereletta or Verelite or Verelyte (Reg. Gen. N. 120707), while under the Plevonia brand name were produced some high-end pens. Unfortunately there are no reliable data about the production between the years '30s and '40s.

In 1936[3] the company was restructured and changed its name in Luigi Pagliero e F., and in 1939 was registered as trademark the acronym LPF inscribed in a rhombus (Reg. Gen. N. 58632). The best known brand of this period was Stilnova, which was used from the late '30s until the postwar period. The initial Stilnova production consisted of variegated or ringed celluloid pens, with wheel or spear clip, and 14-carat gold nib marked Stilnova. These pens were well made, but with rather spartan decoration, with simple rings on the cap, using a button filler. 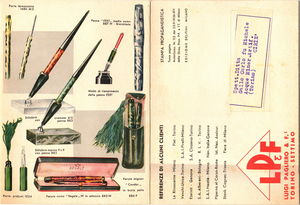 Instead, until this brochure was found, it was unknown the use of the FERT brand, found on pens imprinted as "F.E.R.T. Automatica Brevettata" with the reference to a patent (nº IT-330806) probably referring to the filling system, consisting of a thin U-shaped spring made from an elastic lamina, which can be side pressed to compress the rubber sac, after unscrewing a back blind cap much longer than the usual ones.

FERT production was often attributed to Aurora, probably for the use of this acronym for the Savoia motto "Fortitudo Eius Rhodum Tenuit" on a R.A. produced for the "Touring Club Italiano" campaigns.[4] This brochure allows to date more accurately the use of this brand by Pagliero since 1936, and give precise attribution, while is still uncertain of the meaning of the "FERT" abbreviation.

From this period there also the pens marked Plevonia, which are the most valuable production of the company. These pens were made in ringed transparent cellulois, as a clear imitation of Vacumatic, from which they also copied the filling system.[5] Were produced in two versions (with three rings or with a band and two rings), but in one size. They were equipped with gold nib marked Plevonia and 585.

The Stilnova production continued even after the war, with a set of economic models, in more streamlined lines and with simple decorations. These are usually in ogival celluloid pens, produced as well as with the button filler of the previous models,or with lever filler and piston filler.

A second brand name used by the company before the war was Condor, for the cheaper-end pens. There were flat top models with drop clip, called Condor B and others models with slightly tapered conical ends and arrow clip called Condor S. Both were equipped with button filler. These were economic pens whose celluloid is of inferior quality, and come with gold plated steel nib marked Condor. The Regale name was used instead for pens similar to Condor but their celluloid has better quality, and they have on the body an engraved logo with a stylized crown.

Always to the '40s goes back the production of pens branded Vereletta (the two other names Verelite and Verelyte are supposed to be used for export models) for the fascist propaganda the forced italianization of names. These are very cheap pens with steel nibs.

After the war the company resumed production with the big launch of a new model, the Fulgens (the trademark var registered at Reg. Gen. N. 79131 in 1946), which still attains to the line Stilnova (it was advertised as Fulgens Stilnova). This is a pen of ogival shape with a square clips mounted above the cap in the style of the Eversharp Skyline, from which the style is inspired. The pen was produced in three versions, with the a full celluloid cap with two decorative rings, with a metal cap and with a mixed version where most of the cap was covered by a large metal band. It was good quality pen with a 14-carat gold nib marked Fulgens Stilnova.

There are few precise data about the timing and the models produced after the war, but it is known that in 1955 the company acquired the Stilus brand (Reg. Gen. N. 126664) producing some pens. Other trademarks registered by the company in the '50s are Aesy, Ever-Roll, Stilnova, Condor, Fulgens, Secolgraf, Verelyte. The company was one of the few to be able to adapt its production to the use of new materials (plastic resins) and to survive the disposable ballpoint era, and always remaining in the lower-price end of the market managed to survive the crisis that wiped out most of the historic Italian producers.