From FountainPen
(Redirected from Minerva)
Jump to navigation Jump to search
This page is a translated version of the page Minerva and the translation is 100% complete.

The origins of the Minerva brand are not known with precision, but it can be traced back, resorting to dating of the corresponding Omas models, to the period between the end of 20s and early 30s when the main brand was producing its "flat top" models, of which there are analogues marked Minerva, essentially identical except for the use of a clip without incisions and the use of this mark on the body where it was reported the inscription Minerva and Marc. Dep. on two lines. The trademark, however, was deposited (Reg. Gen. N. 49356) in 1934.

Later for these models the ball clip was replaced by a clip terminated with a spatula, which will then be re-used on other models, starting from the Minerva Classical of 1934. 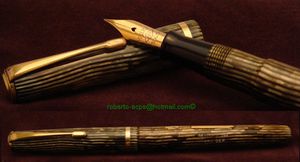 In the early 30s new versions with more slender forms were produced, for which different versions are known. A model is known between collectors as Minerva Elliptical on the basis of the name given them by E. Dolcini in his book on Omas.

During the same period were also produced with brand Minerva some Parker Thrift Time imitations, substantially identical to the original except for the paddle clip and the different celluloid colors, in addition, of course, to the inscription of Minerva and March. Dep. on the body, always put on two overlapping lines in uppercase.

In 1934 was introduced the line called Minerva Classica, characterized by the prevailing use of new paddle clip, and with lever filler, which was kept in production until the 40s. The brand Minerva remained in production even in the 50s and 60s with the model Minerva 60, a piston filler first produced in celluloid and then in thermoplastic resin. There are no known productions with this brand beyond the end of the 60s.