From FountainPen
(Redirected from Filling systems capacity)
Jump to: navigation, search
This page is a translated version of the page Capacità dei sistemi di caricamento and the translation is 100% complete.

One of the criteria with which the filling system is chosen, especially in recent pens, is that of its capacity. It is also one of the criteria on the basis of which we most frequently take sensational dazzles, also because there is a widespread prejudice that a piston filler pen contains much more ink than a cartridge filler one, which, with pens on the market today, is almost never true.

The following table of cartridge capacity is used as a reference (the measures mentioned have been collected on the internet, and have not yet been verified with the methodology adopted later; when they will be, the relevant column will be updated):

For this reason it was decided to start a collection of measures of the actual ink capacity of pens, but for a measure to qualify as such (and not be reduced to a simple statement), it must be repeatable, so in addition to the results of the same, the methodology used to obtain it must also be detailed. 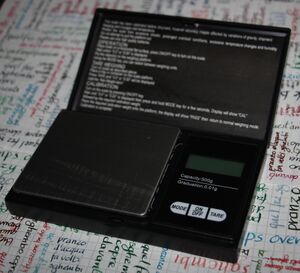 A scale for measurements accurate to a hundredth of a gram

The measurements have been carried out using a scale with sufficient precision, capable to appreciate the hundredth of a gram (of those for weighing gold and jewellery, that you can find for about ten euros on the internet). To give an idea of the order of magnitude, a drop of water from a dropper is between 2 and 4 centigrams.

Then the pen has been filled with tap water. For a comparison that takes into account the liquid remaining in the feeder, the weight was measured several times starting from the first filling of the empty and dry pen, repeating the loading and unloading cycles.

The filling was carried out normally as you do when you load the ink for writing, removing the excess liquid from the feeder (shaking it slightly to drip and placing the nib near the neck of the bottle to remove excess) and drying the one that may be present on the section. An ordinary bottle of ink was used (Waterman 50 ml, but any one is fine, just soak the pen tip completely in it). 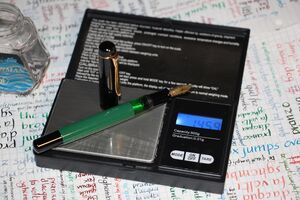 An example of measurement

We measured several times (at least 10) the weight both when the pen is loaded and when the pen is unloaded. From the various measurements the weight for a loaded and unloaded pen was obtained by calculating average and standard deviation. There is no point in using the highest value, the perfect filling does not exist, what is an indication of how much in ordinary use the pen actually charges, is the average.

The value when the pen is discharged used to estimate how much liquid remains in the feeder, but we took as an indication of the filling capacity the value when the pen is fully filled, because pens are filled once the ink is finished and no longer reaches the nib, and this also includes the one present in the feeder. However, you can use the weight of the unfilled pen for a fairer comparison with the capacity of the cartridges, as it indicates the capacity of the filling system alone (with cartridges the additional capacity of the ink held by the feeder when it is immersed in the ink bottle to charge the pen is not available).

On this page only the summary table of the measurement results is shown, for a direct comparison between the pens. The details of the individual measurements have been published (the first three ones are missing) in as many articles (italian only, sorry) on the forum, which you can find indexed at this address.

For the results, look at the Capacity column for the total filling capacity of the pen, which therefore also includes how much remains trapped in the feeder (which is the one available in practice), if you want to make a fairer comparison with the contents of a cartridge, look at the Load column, which estimates how much is actually present in the tank.