From FountainPen
(Redirected from Uhlmann's Eterno)
Jump to: navigation, search
This page is a translated version of the page Uhlmann's Eterno and the translation is 100% complete.

Uhlmann's Eterno is probably the first Italian fountain pens manufacturer. The company was founded in Milan in 1902 by Emil Uhlmann, but there are evidences of his activities in the field of fountain pen production since 1912, with the registration of some trademarks explicitly related to "fountain pen".

Although it is less known than other brands that are self-appointing the title of first fountain pens producer in Italy (like Nettuno, Montegrappa or Tibaldi), the company had an high quality production, which has little to envy to the most famous brands born after her.

Uhlmann's Eterno was founded in Milan by Emil Uhlmann in 1902[1] as a company dedicated to productions of rolled gold overlays for different objects, as also mechanical pencils. Although it was on the market from the 1900 beginnings, general opinion was that it entered fountain pen production around the first half of '20s, by marketing some safety or eyedropper filler hard rubber pen, using parts imported from Germany.

But in fact the company activities in the fountain pens field originated in the '10s, because since 1912 Emil Uhlmann registered, as well as the Eterno trademark (Reg. Gen. N. 12335) also the Famos (Reg. Gen. N. 12938) and The Royal (Reg. Gen. N. 14896) trademarks containing explicit references to fountain pens. Since it is unreasonable to register a trademark for something that is not sold, this consent to attribute to Uhlmann's Eterno the title of the oldest Italian manufacturer. A further confirmation comes from the advertising postcard offered for sale on a website for a safety model Eterno No 6, on one side of which appears written 1908.

The Uhlmann's Eterno initial production brand recalled very closely the Germans and Americans models of the same period. Their pens were engraved with the company name on the barrel, along with its the logo, consisting of a triangle with an eye on the inside. Even the nibs were marked with the words Uhlmann's Eterno on two lines interspersed by the same logo, also made as a simple rayed triangle in earlier models, and such a kind of logo was registered in 1940 (Reg. Gen. N. 62397). 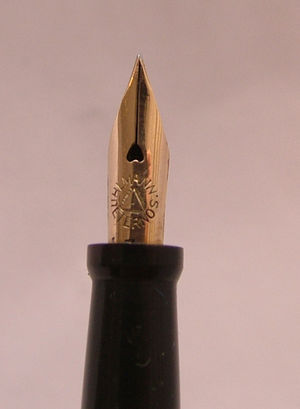 At the same time started to appear on the company catalogs firsts overlay models, which were good quality. They had both simple engine turned pattern engraved with alternating smooth or satin surfaces, or more refined metal works with embossed floral motifs or ​​with enamel decorations in different colors. Even these pens were marked with the company name , or just with the single word Eterno, sometimes accompanied by the logo. 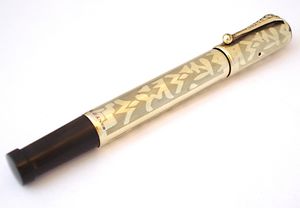 In the early 30s[2] the company changed its name in Industria Reclame L. Uhlmann moving the seat from Via Moscova 14 to Via Piave 7. During this period the company established itself in the production of stationery objects and writing instruments customized for advertising purposes, promoted through illustrated catalogs. The range of customizable items was very extensive and included poor quality pens, probably coming from Germany. To these however was added a good quality production, marked Uhlmann's Eterno or only Eterno, with button filler celluloid Flat top models, clear imitation of the Duofold.

In the second half of the '30s production was restyled according to the new trends, new pens were produced in ringed or marbled celluloid in different colors, known as Penne Lusso Extra in both round or faceted form with lever filler. To these pens were added some other plunger filler models in ringed transparent celluloid, very similar to Ancora Maxima.