From FountainPen
(Redirected from Stilus)
Jump to: navigation, search
This page is a translated version of the page Stilus and the translation is 100% complete.

The Stilus company, founded in Turin in 1917 by Emilio Pecco, is one of the oldest Italian fountain pens manufacturer, and it was born well before much more prestigious brands such as Aurora and Omas. The company was present on the market until the 50s, but then suffered the effects of the introduction of new materials and consequent market changes. It ceased production in 1955 selling the brand to the Pagliero company, that was using it until approximately mid '60s.

The production, despite a progressive deterioration in quality suffered in the postwar period, when the company declined, was quite good; and up to all the '30s was of the highest quality, with nothing to envy to the other best Italian producers. The brand is less known, however, and this leads to lesser interest by collectors respect to other brands, younger in historical productions, and which do not have an equivalent quality. 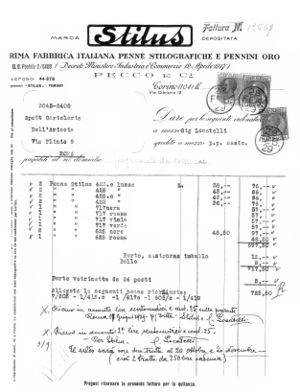 Stilus is one of the oldest Italian fountain pens manufacturer; its origin dates back to 1917 in Turin, as evidenced by the inscription in the invoice shown on the side that reports the date of April 12, 1917 as the date for company registration at the Ministry of Industry and Trade (Ministero Industria e Commercio). This makes this company a producer of great significance, being born two years before the more famous Aurora, although the details of this early period are extremely rare.[1]

The company was founded by Dr. Emilio Pecco in Turin based in Via Cibrario 12, with the name Pecco and C. Stilus, although on some later models (like the celluloid one shown in the photo below) we find a different name as FRATELLI PECCO (Pecco brothers). Others names were Ditta F.lli Pecco or Ditta Pecco & C. fabbrica di penne stilografiche as found in some trademark registration. The Stilus brand however was registered in 1919 (Reg. Gen. N. 18555) and was maintained as a constant reference throughout the production life of the company.

The initial production until the late '20s consists mostly of safety or eyedropper pens in hard rubber, style and construction was similar to the other contemporary production. They were made ​​with wavy patterns and there are also some versions in distinctive color and mottled hard rubber. There are however some different safety models that refers to a specific patent (nº DE-368196) for mounting the inner spiral, which is hooked by a screw on the bottom. These models have are marked in the barrel with an inscriptions reporting in three lines Brevetto, Stilus, Pecco e C. Torino, and in the bottom, there is another inscription reporting the word Brevettata (patented) in addition to the brand name and model number. 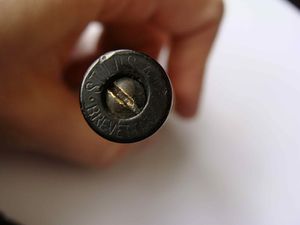 Detail of the patented mechanism

At least in the early years is also known an economic production under the brand Eridania (also mentioned in a 1948 directory), usually accompanied by a model number, and sometimes by the letters PCT, as an acronym of Pecco and C., Turin. The initial production were eyedropper or safety hard rubber pens, in four different sizes. The same trademark was used on a later production for celluloid button filler models.

It is also believed that the company has produced parts and pen for other brands, and some believe that also the brand Scriba is attributable to Stilus, but this can be excluded because that trademark was registered (Reg. Gen. N. 42353) by a company from Verona. For sure it was attributable to it the Eridano trademark, registered in 1929 (Reg. Gen. N. 38320), which use is confirmed by this invoice from 1937. The same trademark is reported in this page of the Paravia guide of 1940 together with the mark Aurea, in one page of the same guide of 1948 are instead mentioned the two trademarks Eridania and Mewflex while in the same guide of 1952 are shown the Eridania and Dorica trademarks.

After this early ones, as done by most Italian brands in the same period, newer models were produced using a Duofold-like style. Some of them have a ball clip marked with the Stilus brand in cursive engraved vertically, to which was added a longitudinal 18 KR engraving written on the end of the clip near the ball. These models were produced with both button and lever filler. The production of these models continued until the '30s, with new celluloid versions.

There were many different sizes of nibs, all made in 14-carat gold, and marked Stilus horizontally in italics. A specific range is unknown, but the maximum size, used on the largest fountain pens, was 9. In the '20s and '30s were also produced overlay models with very elegant engine turned decorations in the art nouveau style. 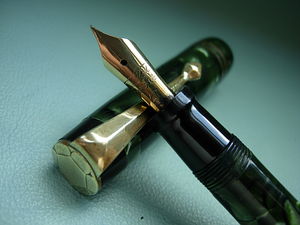 During the '30s the design began to be revised, with the abandonment of the ball clip for the adoption of more streamlined lines. The Stilus production followed the trend introduced by the Omas Extra, with wheel clip and faceted pens, imitating the design of the Eversharp Doric, which characterizes virtually all the Italian production of that period. In this period were produced lever filler celluloid models named Automatica.

With the progress of the autharchic fascist propaganda in the late '30s as the other manufacturers, the company began to use steel nibs, and like the other Italian companies adopted for the steel alloy an invented name: Osmiria, that was registered as trademark in 1939 (Reg. Gen. N. 60764). Use of steel nibs were then combined with chrome trim instead of gold ones. In the previously cited 1937 invoice are also mentioned some Eridano piston filler pens, and this will put the company between the firsts (if not the first) to adopt this filling system in Italy, well before WWII.

After the war the production quality began to decline. Following the design in vogue at that time, adopted by all manufacturers, new models were more streamlined, using an ogival shape. In addition to conventional lever filler and the button filler was also used the new piston filler. Were also produced economic fountain pens with gold-plated steel nibs.

The company remained in business until around 1954, when for the effects of the crisis of the fountain pen market was forced to shut down production. The brand was sold in 1955 to Pagliero, another company of the nearby Settimo Torinese industrial district, which continued production until the early '60s.[2]

Despite being one of the oldest producers in Italy, and having made ​many ​products of excellent quality, Stilus pens does not enjoy great reputation between collectors, and are often ignored and undervalued compared to those by other brands that are more famous despite not having a history as old and a production as good.